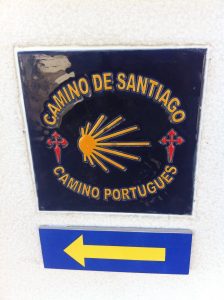 Last week I wrote that I was mainly chilling in Ericeira, giving some massages in an amazing guesthouse called ´Margarida´s Place´. This week my main activity was walking. I walked over seemingly endless paths and roads. Passed elegant, old and beautiful villages and moved dust of tiny paths through pepper and tomato fields. I will shed some light upon the most memorable moments of past week.

Day 1  Lisboa  Alpriate (~25 km)  The most memorable moment of day 1 definitely was my lunch in a construction workers restaurant in the outskirts of Lisboa. A small family restaurant was stuffed with Portuguese man between 30 and 80 years old. The ladies that served the food were running around and screamed the orders to the kitchen. I was placed on a big table with a nice man facing me. He spoke a little English and the conversation we had soon switched from fish (peixe) on the menu to what we considered to be most important in life. Unless the poor English of the man and the few words Portuguese I had learned so far, we understood each other perfectly. He left. Then… How big is the chance that in this kind of place you meet other English speaking Portuguese people that had seen you sitting against the cold wall of the church, writing a weekly journal in the centre of Lisboa the day before? I don’t know, but it happened!

Day 2  Alpriate  Azambuja (~30 km) To give you a little impression of what the Caminho de Santiago looks like for me right now: I mostly walk alone. Others that walk the Caminho are 40+ and walk in pairs or alone too. My main communication so far consists of little contact with Portuguese people I pass: “Ola, bom dia!” and a smile. There is a lot of sun and it mostly is between 30 and 35 degrees Celsius. So far I have been walking besides the river through industrial area’s and over very dusty roads. This night I stayed at a Santa Casa de Misericordia, a place for pilgrims linked to the church (igreja). The woman who hosted the pilgrims was very nice. Her name was Maria do céu (Maria of the sky). For two hours I have been her student (aluna) learning Portuguese. She was a very calm and good teacher and although Portuguese is seemingly one of the hardest languages to learn, I really started to like Portuguese!

Day 3  Azambuja  Santarém (~32 km) The hardest, toughest, hottest walk so far! 16 km without anything you actually need during such a walk (shadow, food, water). But I walked on with a strong pace to finally arrive in a very luxurious hostel in Santarém called N1 hostel.  After this tough day a great and healthy 4-course dinner was served. Luckily I was still hungry after I had seen an old French pilgrim massaging his butt with strong smelling oils in a Speedo on the balcony during sunset.

Day 4  Santarém  Azinhaga (~27 km) Today was another very hot day. I decided to listen better to my feeling concerning when to take a break and how fast to walk, because I noticed that I tend to go fastest I can. This meant a coffee break after 30 minutes already in a café in which I found a suitable Portuguese saying: “Um bom dia começa com um café.” Just after this coffee I met Sook-Ja, a Korean woman living in the USA. She is exactly tree times my age (69) and walks the Caminho to give fortune to the marriage of her son. She invented a song about her son and his wife that she sings when she walks alone.  Most memorable of today was that pushed Martha for about 10 km with her walking stick and carried her little bag. Martha is a Hungarian woman of 60 that had a heat rash and many blisters on her feet, She was amazingly grateful because she was suffering a lot and said otherwise not have been able to reach a sleeping place. She decided to pay half of my stay as it cost 20 euro, which is a lot during the Caminho. In the evening we had an amazing meal (Sopa de feijão branco) in a family restaurant and it was great to see Martha smiling and being enthusiastic because of the delicious food. When I am back in The Netherlands I will make this soup for you and you are all invited to taste!

Day 5  Azinhaga  Vila Nova Barquinha (~17 km) Today the Korean woman asked me to walk together because she couldn’t see the yellow arrows anymore as her eyes were getting old and so got lost the day before. We walked together for the first 10 km, which gave me a double feeling because she was nice and I liked to help her, but I had to walk twice as slow which meant being twice as long in the very hot weather and holding back all the time. A situation that, as many similar situations, asks for a good balance between fulfilling my own and others needs. Most interesting of today was probably my sleeping place: the fire fighters (bombeiros). They offered us a bed in a room full of double beds and a refreshing cold shower. It was perfect and we did not even have to pay for it!
Before I forget… something even more memorable happened today. On the way I passed old buildings that were desolate. It was a beautiful and at the same time scary place that made me curious. I climbed over the fence and went into multiple buildings. My heart pounded in my chest, as I was all alone and did not know what I was going to find. I found a lot, including a room with very old and dirty clothes and fishing nets, a new note book that probably once was a book used to write bills of the factory and snakes. It was a nice and scary adventure. 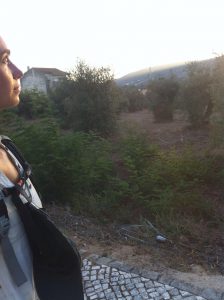 Day 6  Vila Nova Barquinha  Tomar (~23 km) Eucalyptus and cork woods, hills up and down and a fresh morning, great! The first 8 km I walked together with Sook-Ja again, so she did not get lost. After that I just started running every down hill because I felt like. It felt deliciously great and free! In a little village I ate the best Portuguese bread I ate so far. I even went back to that little hidden bakery without sign to get another one and to see the kitchen were the magic happened. The woman started to smile when she showed me the pile of flour and her ovens. I could now, besides tasting it, see it was her passion to do this. The rest of the day I spent in Tomar, walking around eating, sitting and drawing an impression of the surroundings in a park.

Now it is now again and I am sitting in a cervejeria where I just finished my fried bacalhau and alcohol-free beer (that I will not order anymore). I feel great, good, full and warm. Time to sleep at the bombeiros of Tomar! 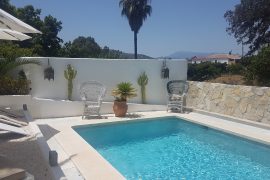 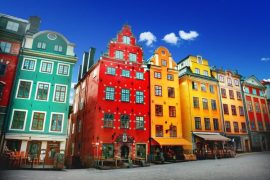 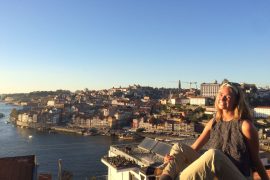 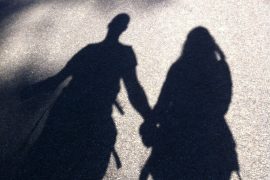 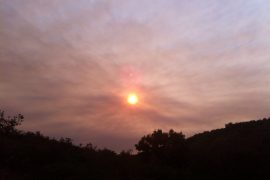 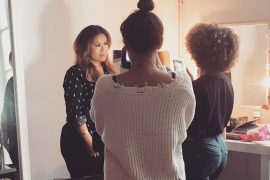 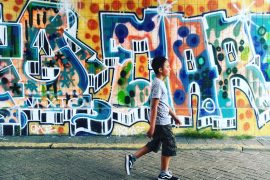